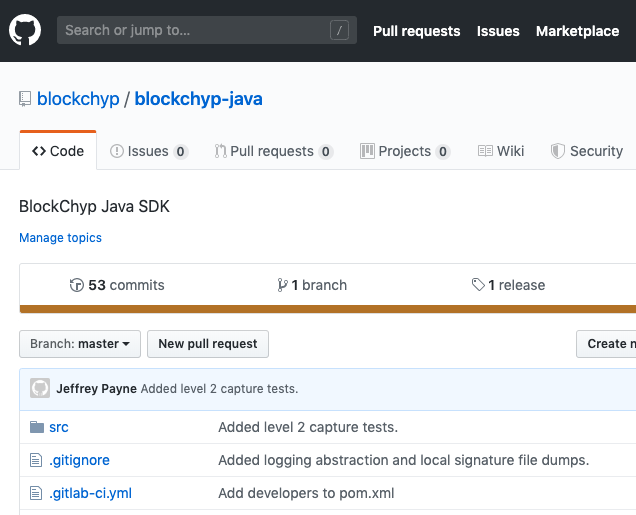 The BlockChyp Java SDK (software development kit) is the latest in a series of open source SDK’s from BlockChyp, coming on the heels of BlockChyp’s Go and Javascript SDK’s.

While BlockChyp is compatible with any programming language or operating system thanks to its simple terminal and gateway REST API’s, SDK’s are the preferred way to integrate with BlockChyp because they speed up integration and they encapsulate some of BlockChyp’s networking internals, particularly how terminal IP addresses are resolved.

“If Java developers use the SDK, they won’t have to worry about computing BlockChyp’s HMAC authentication headers and they’ll get the benefit of terminal route (IP) lookups and route caching out of the box,” said Jeffrey Payne, BlockChyp’s CTO. “They’ll also be able to code their applications in such a way that cloud relay vs local network terminal communication is totally encapsulated. This means POS deployments will almost never require port forwarding or custom router configuration to setup, no matter how complex the network configuration.”

The SDK includes support for the full range of payment transactions, along with terminal line item display, terminal messages, and custom interactive terminal prompts including email and phone number capture. For newer Java projects, BlockChyp can work with the latest Spring Boot or Dropwizard applications, while still maintaining backwards compatibility with Java 1.6 for older systems. BlockChyp SDK releases are in Maven Central, meaning Java developers can use tools they’re familiar with like Gradle or Maven to manage dependencies instead of trying to hack hand downloaded jars into their builds.

BlockChyp’s Java SDK was hand crafted by Java developers for Java developers, designed for a range of use cases from thick client Swing applications to modern web applications. The SDK was designed to be used either by itself or as part of popular dependency injection frameworks like Spring and supports property or constructor based dependency injection. “Unlike the Java SDK’s for other platforms, our SDK is not autogenerated or verbose. Our Java SDK was designed for real world Java developers to be simple, self documenting, and concise,” added Payne.

BlockChyp is committed to open source SDK’s, eschewing the conventional exchange of NDA’s that often serves as an obstacle for independent developers wishing to explore a payment integration. Jon Decker, BlockChyp’s CEO, thinks the secrecy that usually surrounds SDK access in payments is outdated and pointless, stemming more from the established payment companies being embarrassed about their technology than trying to maintain trade secrets.

“It’s easy to say you are a different when you hide behind contracts and NDA’s before someone can see your technology,” Decker said. “It’s just sales speak. Today’s society has become a show me state, and we at BlockChyp are constantly showing why we are different. This latest open source SDK shows how we are different in the integrated space.”

Check out the BlockChyp Java SDK on Github to access source code, download binaries, and review documentation. No NDA required.